You Can Win Too – Loretta’s Story

You Can Win Too 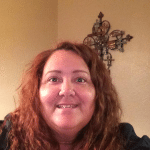 Hello everyone, my name is Loretta McCutchen, I proudly now live in Shallotte, NC. A place that I can call home, where peace resides in and around my home. Thanks be to God and Brunswick Family Assistance and the people who work very hard there to see people’s lives get better.

I will say this from experience, that sometimes uncontrollable difficulties can occur in ones life unexpectedly, and cause us hardship for a moment of time. As I went through my own personal hardships, I cannot help but know that with God and loving people in our world, is what made a difference in my life.

I was raised in a large family and violence ran rampant in the household. Between physical and verbal abuse/violence was not the only thing our mother and us children suffered. We were not allowed to speak ever unless we were asked a question by dad. I don’t ever remember speaking until the first grade. We were taught to fear speaking, especially if you were female. Maybe you have experienced the same type of experience of olden times where children were seen and not heard, and beating was the way to make you a good child. However, nothing could be better at times they would say, than an old fashion beating.

My mother was of dark skin heritage and my father white as a ghost. I was always really dark when I was younger and the bullies at school took liberty to beating me because they said I was a half breed.

As I got older in high school, I dove right into drugs and alcohol to be accepted to help stop the beatings at school. Finally I was married to a man that was worse as far as violence goes, than my dad ever was. He is now my ex husband, I couldn’t live with being tortured any longer. Finally one day he left the keys to our second car at home one day. I quickly left the homestead in the desert and went to the nearest police station. And after reporting him to the authorities, they sent me and my children to a safe house.

I raised my children and still pray for their healing in their hearts and minds as to what they had to witness as children. They are wonderfully thriving today thanks be to God and loving people in their lives.

After my children were grown, I had received a spinal injury that landed me in a wheel chair. I received therapy and eventually was out of the wheel chair. After workers comp quit paying, my boss fired me because I couldn’t work full time anymore, as per the doctors orders.

After I lost my job, I sold everything I had to make ends meet until I could find some kind of part time work. No one would hire me because my spinal injury was as such that I couldn’t lift anything heavier than 5 lbs.

I ended up in a shelter, and my entire family was ashamed of me for being homeless, and would not accept me any longer. They had been used to me giving them money, but when I didn’t have anymore I was not acceptable to them any longer.

I have witnessed in my homelessness, seeing people frozen to death, in severe depression, some turning to gang violence and prostitution as a means to survive their homeless state, sadly I lived in a homeless camp where one of the homeless was murdered. It is not fun out there, sadly some grow so hard after a while that they give up.

It take a community to rescue those who are stranded in life. And that is exactly what Brunswick Family Assistance is doing by making people’s lives better through their programs.

Once I started receiving disability, it put me in a different bracket to where I could pay a type of subsidized housing.

I survived nearly 4 yrs. Of street and shelter violence when I was approached by a social worker from Brunswick Family Assistance housing program.

Finally I have a safe place to live.
Thank you Brunswick Family Assistance