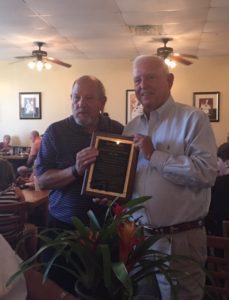 Mr. Bill Hadesty, current Chairman of the Board of Brunswick Family Assistance, presents a plaque to Fred Stephens in recognition of his outstanding service.

“I was a food pantry volunteer,” recalled BFA’s 73-year-old executive director who is officially retiring this Thursday, June 30.

“I worked every Friday morning and packed boxes of food,” Stephens said of his initial work that launched seven years ago at BFA headquarters in Shallotte.

The former Ohio-based national sales director and assistant football coach apparently did his work so well, he was eventually asked to join the BFA board, twice, with Stephens declining both times.

At his first meeting, Stephens was appointed secretary of the board, which led to his involvement with BFA’s executive committee and eventual leadership.

“The executive committee of the board of BFA does the heavy lifting, so to speak,” Stephens said. “We do a lot of the work and take recommendations to the board for approval. At the beginning of my board membership, I was involved in what was going on in the agency.”

When BFA lost its executive director in 2012, Stephens stepped in for the short term until a replacement could be found.

“Two months later, I said, ‘Hey, I’m kind of enjoying this,’” he recalled. “I feel energized. I get up in the morning. I have something I need to do. I feel good when I got home that I got it done. It’s just like the old days when I was working, so I said I’ll do this a little while longer.”

Upon becoming BFA’s interim acting executive director, “I quickly realized that I’ve either got to take this job full time or find somebody, because people who support nonprofits want to know about succession planning,” Stephens said. “Are you here or are you not here? And I said I’m here. I said I would be here for two, maybe three years. Well, I’m finishing my fourth year.”

Stephens’ stint, which officially launched July 1, 2012, has “gone by fast,” he said. “It really has. I mean, I feel younger now than when I started here. But I’m old enough to say, hey, you don’t know what tomorrow brings, and I’ve got six grandkids in the Columbus area and my wife and I want to spend more time with them.”

Stephens, who was honored at a BFA retirement party June 13, has a golf tournament scheduled Friday, July 1, the first day after his departure. But he isn’t leaving BFA in the lurch.

BFA board member Lou Nistler, former head of the National Parkinson Foundation and Combined Federal Campaign in Washington, D.C., has been transitioning with Stephens for the past month to become BFA’s new executive director.

“(Nistler) has been on the board since the beginning of June, so it’s a smooth, seamless transition,” said BFA board member and former chairman Ken Papaj.

Stephens will be a tough act to follow, but Papaj thinks Nistler will be a great person to continue the great work Stephens did for the agency.

Citing BFA programs to help with housing, homelessness, book bag, commodities and Christmas distribution programs, Stephens said, “We’ve got a lot of moving parts in this organization. You can’t do anything without a good team.”

He said BFA’s key stakeholders were notified the objective was to have a qualified replacement at the beginning of June, so he and Nistler have had the entire month to collaborate on the leadership transition.

“(Nistler) has met all the key stakeholders either in the county or throughout the Shallotte area,” said Stephens, who gave notice last year of his plans to retire.

The two also met with key people in Wilmington, at UNCW, the Good Shepherd Center and the Cape Fear Memorial Foundation.

“They got a chance to get to know (Nistler) and his background,” Stephens said. “I think the board selection committee was extremely good at what they did or fortunate or a good combination of both, because I’m very pleased with the man they hired. I think he has a great background in nonprofits, and I think he can take this organization to a new level, which I hope we can do.”

Nistler, he said, “knows I want to leave and walk away and not be here looking over his shoulder or feel like that I’m in the way, so I’m going to walk completely away unless they want me to come in and talk over a cup of coffee or something like that, because it’s his organization.”

Linda, his wife of the past 51 years, is also a BFA volunteer.

“We want to do some traveling — not exotic, but around the state to see what North Carolina’s all about,” Stephens said. “I’m kind of a Civil War buff, so I want to go to all the battlefields, things like that.”

“My wife and I are looking forward to spending more time together on the road seeing our kids and parts of this country that we haven’t seen,” Stephens said. “At 73, 74, you don’t know what tomorrow’s going to bring. You don’t want to wake up and say, gee, we should’ve done that when we had the chance.”

Stephens retired from his “real career — the one that paid all the bills” — in 2006. He spent the first three years of his retirement going north every fall to be an assistant football coach for his son.

The Pittsburgh native met his wife at college in Cleveland, Ohio, married in the college chapel and settled in Berea, Ohio, to raise their son and daughter Megan, a system-wide nurse at Big Walnut High School.

“I’d always told my wife, look, when I retire I’ll pay back or pay forward,” Stephens said. “I need to get involved and do something, and I had always said I would work in a homeless shelter or food pantry or something like that. Well, there wasn’t either one of those here so I ended up at BFA, and the rest is history.”

Stephens worked as a manager of human resources and labor relations and compensation and benefits for 20 years, then spend the next 20 years in software sales consulting selling human resources product and serving as national director of presales for SAP America.

“I managed the entire U.S. sales force, plus I had responsibility for Canada and Central America, too,” he said.

He cited BFA’s financial literacy program implemented two years ago as a good one that it’s still running with clients on a voluntary basis.

“We strongly recommend that they take the class that will help them do a little better planning with budgeting and give them a better understanding of what money they have and how they’re using it, which will help them try to break the cycle of poverty they’re in, and I think that’s a good thing that we’ve done,” Stephens said.

Last year, BFA also expanded its space in Shallotte by moving into a vacant, adjacent, roomier storefront that underwent transformation to accommodate offices it had never had before. The move included a new conference room as well as space for BFA’s new partner, New Hope Clinic.

“What I’m most proud of here is the quality of the staff that we have to deliver on our mission and vision,” Stephens said. “We treat people who come here with respect that they’re entitled whether they’re in financial difficulty or not. And we are responsible and trusted to have fiduciary responsibility to make good decisions about the money that’s given to us, that we help the greatest number of people and don’t get scammed. I think we’ve done a good job of that.”

He’s proud BFA’s image has been repaired over the last four years, to one that’s “good, reputable, honorable and transparent.”

“We’ve been able to raise funds, because at the end of the day, if you don’t have money, you can’t help people without it,” he said.

Joining BFA during the time of the recession, Stephens has also seen a bit of turnaround in terms of the number of clients’ visits.

“We are the private safety net in this county,” he said. “We always see issues, and as long as you have 5 or 6 percent unemployment, you’re going to have 3,000 to 4,000 people with no jobs. We have poor people in this community.”

Stephens and Papaj estimate 17 to 20 percent of the county’s population receives some type of help from BFA.

Stephens cited a widening wage earnings gap “between those who have and have not,” with 50 percent of the people who are employed in Brunswick County working “notoriously low-paying” service jobs that are short on benefits.

“Many people come here who are what we call working poor,” he said. “They’re working two or three jobs — landscaping, cooks, waiters and things like that, who just can’t make ends meet with their families. So it’s not just people who retire and don’t have any income.”

He recalls the young woman who came to BFA after giving birth prematurely to twins. One of the twins died in childbirth, and the other was on a respirator.

“They didn’t have two pennies to rub together, and we helped directly,” Stephens said. “We also helped pay for the funeral expenses and solicited other people who gave us donations just to support them for gas and help them stay in housing in Wilmington while the baby was on an incubator. You just feel good that you were able to help them through that crisis.”

January and February are always a unique time “because you always see people who work hard in restaurants, then they close the restaurants down in January and they can’t pay their rent,” Stephens said. “They come here for rental assistance.”
He has called employers who almost tearfully ask if BFA can help, and to do so because the out-of-work employees are good ones they hope can come back.

Stephens feels good BFA is showing a strong balance sheet these days thanks to good management and ongoing support it receives from churches and others for its work throughout the county. In addition to its Leland office, BFA has programs in Southport, Oak Island and Boiling Spring Lakes as well as a newly implemented one at the county parks and recreation building at Waccamaw School in Ash to help people who are unable to get to Shallotte.

Papaj said Stephens has been an outstanding leader with unsurpassed passion, compassion and dedication to the community.

“He really put BFA back on track,” Papaj said. “When he came on board, we were struggling a little bit. Through Fred’s leadership and direction, I think BFA is in its strongest position. I think BFA has probably more of an impact in the community than ever before.”

“I’ve told the staff after the first of the year, I will evaluate my position in life and see whether or not it makes sense to volunteer, to be a board member or whether I’ll do something else like Meals On Wheels,” he said. “I can’t see myself just sitting in a chair at home or playing golf. I don’t see that.”

Laura Lewis is a staff writer for the Beacon. Reach her at 754-6890 or llewis@brunswickbeacon.com.